Fabulous evening at Beach Creative in Herne Bay last night, at which Nancy Gaffield and Wynn White were In Conversation, talking about their individual as well as their collaborative processes on Tokaido Road.

Wynn’s photographs are currently being exhibited at Beach Creative as one of several events leading up to tomorrow’s performance at The Gulbenkian Theatre in Canterbury, and last night was the opportunity to get up close and personal with both Wynn and his images, as he took the assembled crowd through his creative process, interspersed with Nancy reading from her cycle of poems. 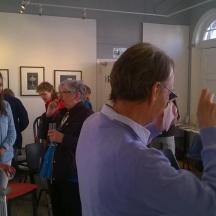 Thank you to Beach Creative for hosting Wynn’s exhibition, and for last night’s In Conversation; it all builds up to tomorrow night’s performance – see you there!

Nancy reads further poems from the cycle, and talks about the cycle as a whole, over on The Poetry Station: click here for more.

Nancy reads further poems from the cycle, and talks about the cycle as a whole, over on The Poetry Station: click here for more.

Boy, am I proud of this. Here’s the score and instrumental parts for Tokaido Road. 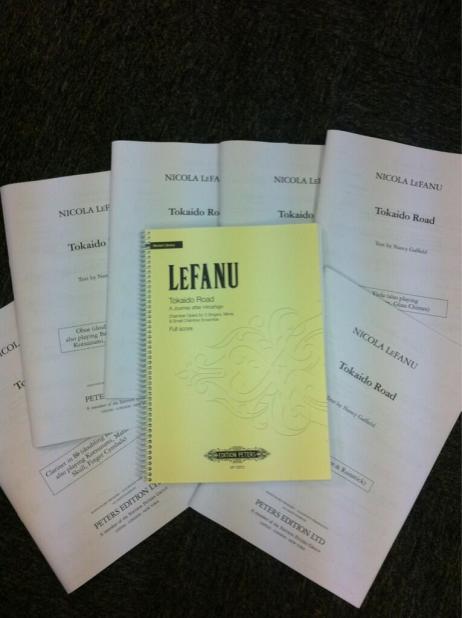 Tokaido Road is Nancy’s words, Nicola’s music, but I have a strong bond with this work. I like to think that I gave it some space to grow and goals to aspire to. I’m like a surrogate mother or doting aunt – there’s a duty of care in commissioning a new work. You have to nurture it. You want to see it flourish, contribute to a culture, speak to an audience, to be representative of its time. And like all new things, you want it to develop, grow, mature.

Tokaido Road was born of an artistic idea, a deep curiosity and an ambitious desire to change things. The relationship between Hiroshige’s prints and Nancy’s poems was already rich enough in artistic possibilities. The opera quickly became a framework for a set of questions: what is the ‘complex and murky relationship’ that exists between the arts? Tokaido Road is a study in extended ekphrasis, a term that describes the use of one art form to ‘comment on’ or ‘illustrate’ another. How does this translate across a second culture? I wanted to present this powerful cross-cultural, cross-arts synergy as a rich and highly accessible source of pleasure, entertainment and education rather than a misunderstood and sometimes marginalized form of art. I wanted to make casual media labeling (such as ‘fusion’, ‘experimental’, ‘fringe’), often used as a result of uncertainty surrounding music that juxtaposes different cultures, redundant. I wanted to create a project that would appeal to as many people in as many ways as possible.

Anyone who had raised funds for new music will empathise with the immense hard work and perseverance needed to enable a project to happen. But the journey has fascinated me – there are challenges and opportunities to be creative at every level, even from a project-management perspective. Today marked the end of the beginning: now the journey takes a new path and I can’t wait to see where it will take us.

Taking time out from her busy schedule of teaching and writing, I caught up with Nancy Gaffield and asked her about the impact turning her cycle of poems, Tokaido Road, into a libretto has had on her work.

What impact has creating a libretto from your cycle of poems had on the poems themselves ?

I was thinking about this, even before you asked the question. When you write, you are always aware that your work is going to be released into the world and become its own entity, although you’re not often mindful of this until you see a review! So you have no control over people or their responses to your work. But now I see people quoting my lines on Twitter! People are reading them in so many ways, and the poems take on a life of their own. Still, it’s surprising! Not negative; just surprising. Ownership is much more collective. I think Nicola now knows my poems better than I do…

END_OF_DOCUMENT_TOKEN_TO_BE_REPLACED

International Women’s Day is all about celebrating inspirational women and their achievements. As the website declares,

International Women’s Day events honour and celebrate the achievements of women all around the world, ranging from small random informal gatherings to large highly organised events.

As part of this global celebration, here at Tokaido Road we are delighted to be championing an innovative, cross-disciplinary creative project that is predominantly female-led.

Brainchild of Dr Kate Romano, Deputy Head of Academic Studies at the Guildhall School of Music Drama, Tokaido Road is written by composer Nicola LeFanu, whose works have been performed, recorded and broadcast worldwide and who is a former Professor of Music and Head of Department at the University of York, with a libretto by Nancy Gaffield, Senior Lecturer in Creative Writing at the University of Kent. The chamber opera is directed by Caroline Clegg, Associate Director at Welsh National Opera, a freelance director working in theatre and opera and founder of the highly successful, award-winning Feelgood Theatre Productions.  And the set and costume design is by Kimie Nakano, who has a highly successful and international career as a designer in theatre, opera, film, dance and television, including working with Oscar winning Costume Designer Emi Wada on Peter Greenaway’s Eight and a Half Women and with the Akram Khan Dance Company on the ‘Vertical Road’ world tour.

A genuinely collaborative project, realised by an exciting team of women who are leading practitioners in ther respective fields. Tokaido Road is excited to be a platform for their achievements.

History in the making; composer Nicola LeFanu and poet-librettist Nancy Gaffield working together on Tokaido Road. In the fourth photograph, they are watched over by Elizabeth Maconchy, in a painting in 1932 by Kitty Church.

Tell us about your involvement in Tokaido Road.

Almost exactly two years ago, I was contacted by Kate Romano (Okeanos) about the prospect of a musical piece around my book of poems, Tokaido Road. I was completely surprised by this, but also intrigued, and agreed to meet with Kate and Jinny Shaw in London to talk through their ideas. Kate and Jinny discovered my poems after a Guardian review, and they were keen to involve my work in an Okeanos project. By the end of that first meeting, Kate had sketched out a plan for me to re-work the poems (as librettist), with a composer writing a 50-minute chamber opera for Okeanos, to include traditional Japanese instruments and a visual element. It was also at that first meeting that Kate came up with the idea of approaching Nicola LeFanu as the composer.

What first attracted you to the idea of the Tokaido Road project?

I am not a musician, nor had I ever written a libretto before, but I have collaborated with musicians and am totally committed to the notion of cross-fertilisation in the arts, so I was completely fascinated. Re-writing the poems as a libretto, however, was a daunting task, and in the beginning I found it nearly impossible to do. Part of the reason for that is the narrative element—which although implicit in the poems, is not overt, nor did I want it to be, so it was a battle of will. Nicola was a huge help. We worked together, both in York and in Canterbury over three weekends, so it really is a composer-librettist creation, just as Kate originally envisaged it would be. This collaboration has been deeply rewarding.

What excites you about contemporary arts?

The broad spectrum—and the various ways that art speaks to the moment. It is a very exciting time to be involved in the arts in Kent now—Sounds New Music and Poetry, Wise Words, Zone, Free Range—just to name a few.

What has the project taught you / shown you / made you aware of?

What this project has shown me is how hugely labour-intensive work like this is. When it was proposed that it would likely take two years from initial idea to the performance, I couldn’t believe it. Yet, what a wonderfully creative period it has been, and I cannot imagine a better team of people to work with.

What relevance, for you, does the project have to today’s cultural environment?

For me the project speaks to the present cultural environment in several ways. First, there are shockingly low numbers of women in contemporary music—as players, as composers and conductors (in 2010, only 4.1% of new commissions were awarded to women composers, according to a recent Guardian article). Tokaido Road features a woman composer, librettist, and director. Moreover, it is a multi-media experience, with a composite of music, poetry, mime, dance and visual imagery and thus shows what exciting possibilities exist in cross-art collaborations. Finally, the opera deals with timeless themes: travel, discovery, love and loss; it reminds us of the power of art to bear witness.

Next stop on The Road:

Sign up to receive our e-newsletter: a weekly round-up of our latest stories, plus occasional event previews: delivered straight to your Inbox! 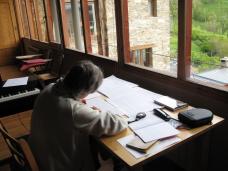 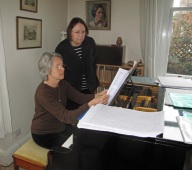 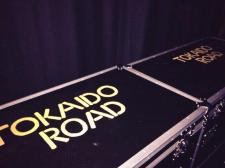 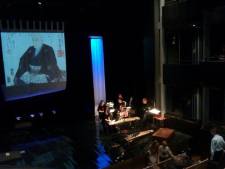